In a bold move for E-Learning in South Africa, Shuter & Shooter Publishers have taken a step to assist in bringing modern teaching and learning techniques to classrooms across South Africa.
In an interview, Sibonelo Mkhasibe, the e-marketer from Shuters, said “We have noticed some reluctance in schools to purchase e-books without knowing how they will work in the classroom. Many schools have already spent their budgets on physical books this year, and cannot afford to spend more at the moment. This is why we at Shuters are giving away a FREE 1-year licence on any of our Grade 1 to 12 Core CAPS titles, purchased before 31 January 2016, through our e-book store.”

This will allow schools that could not afford or are hesitant to take the step into the future of E-Learning, to explore the possibilities this medium offers.
Shuter & Shooter’s proprietary Edu-reader application (available for Apple and Android devices) allows users to read their e-books. This app brings extra resources such as a calculator, conversion tool, notes, bookmark feature, animations, videos and more to their existing CAPS approved material.
This essential tool for E-Learning is available at no cost, downloadable from the Google Play Store and Apple iStore. Once users have downloaded the app, it is a simple matter to redeem the free titles from the Shuters e-book store. Shuters will also have a helpline available from 7am to 8pm, 7 days a week, which can be contacted on 080 7488 377.

Shuter & Shooter Publishers have always believed in the importance of education and in giving back to the community, and hope that this bold initiative will help to expose learners and teachers to the potential that this new medium holds for education in South Africa in the future. – CEO , Primi Chetty

We are very excited to introduce the latest addition to the Songololo imprint at Shuter & Shooter : Hair Day. 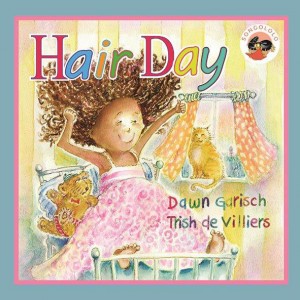 WHOSE HAIR?
Zinzi likes her hair the way it is. Her mother wants it cut. On the way to the hairdresser Zinzi sees how many different kinds of hair there can be. Her imagination runs wild. But what happens at the hairdresser is even more crazy…

This hilarious first reader, beautifully and whackily illustrated by Patricia de Villiers, explores the power struggle between a mother and her child over the all important right to decide on whose hair it is anyway

Dawn Garisch is a doctor who writes, a poet who walks, a researcher who dances. She has had five novels, a collection of poetry, a non-fiction work and a memoir published. Her award-winning short stories and poetry have appeared in anthologies, journals and magazines. She has had a short play and short film produced and has written for television and newspapers. Three of her novels have been published in the UK.
Her novel, Trespass, was nominated for the Commonwealth Prize in Africa.
Hair Day is her first children’s book.

With a background in painting, theatre and print-making, Patricia de Villiers has provided illustrations for numerous publications – for adults, for youth and for children. After some years as a public health manager, she is re-entering the creative world.
The publication of Hair Day marks her happy return to the rewards of inventing and making picture stories for children.